Why do professional power amplifiers have bridges?

Why do professional power amplifiers have bridges? How to use bridge mode?

Bridge mode is a connection method for power amplifiers in the professional audio field. 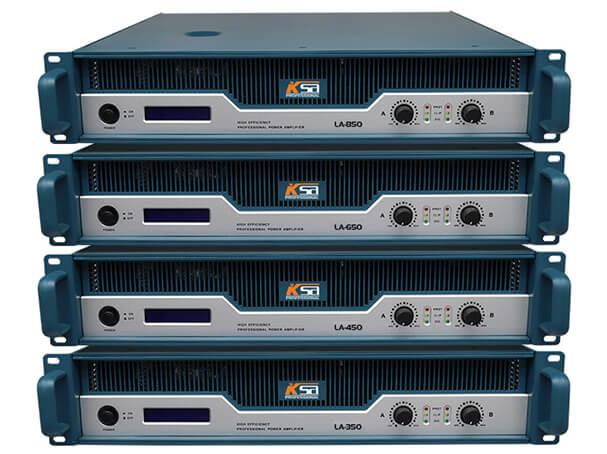 The bridge of the audio power amplifier is to push the outputs of the two amplification lines to a group of loads (speaker or speaker system) at the same time.

When bridged, the audio waveforms output by the two amplified lines are inverted and loaded on the speaker at the same time, so that the load has twice the audio voltage, and the power is increased by four times (under the ideal current is sufficient, and the load impedance is the same ).

However, due to power limitation, the current cannot keep up, so the bridge is often not suitable for impedances below 8 ohms, so the output power is generally doubled.

Most professional performance, KTV and other power amplifiers support the bridge mode. After the power amplifier is adjusted to the bridge state, the speaker does not need to be grounded (black negative terminal is empty), the speaker wiring is connected across the two red output stages, phase The red binding post will indicate the phase of the bridge (that is, the positive and negative poles).

So, under what circumstances will you need to use the bridge function and how to bridge it? After the bridge is connected, how to calculate its power and what harm does the use of the bridge cause to the sound?

1. Early power amplifier products, due to the limitations of component parameters, single channel can not achieve high power output, the use of bridge mode can ease the desire for high power output;

2. When the single channel power of the power amplifier is insufficient to promote high-power size speakers (such as dual 18-inch ultra-low speakers), you need to use the bridge mode to meet the high power requirements of the speakers;

3. In order to save costs, the power amplifier with larger single channel power is more expensive. Use bridge mode to meet high power output;

4. There is a certain distance for on-site wiring, when there are a large number of speakers and large power requirements, and the environment is more special, the bridge mode will also be used to promote multiple high-power speakers.

Generally, the input interface board is provided with a dial switch, and the toggle switch is changed from studio (stereo) to bridge (bridge mono) behind the amplifier.

When the bridge function is used, any port of the two output SPEAKON sockets is connected to 2+ and 2-.

Because the output power of the digital power amplifier is very large, in order to reduce the contact resistance of the port (to reduce the heat generation), it is best to use a parallel connection method, OUT1 (1+, 2+) is connected to the speaker terminal 1+,

三、How to calculate the power after bridge

四、How does bridging harm the sound

1. The power amplifier bridge is often used for high-power low-pitched speakers. In theory, it has an impact on sound quality, but the human ear cannot hear it. Push the full frequency with the bridge amplifier, the sound from the speaker will make people feel very refreshing, just grasp it, and it will not burn out under normal circumstances.

Burning speakers in the disco is a common thing, first because the power configuration is not good, or the pressure limit is not adjusted properly, and the DJ's mixing console level is at an end. The input level of the mixing console is at the end, but the output level is less than -10dB, and it may burn out.

2. The use of power amplifier bridge to push high-power speakers is the next step in the application of the system, and it is a real trick. Theoretically speaking, it doubles the power and can advance. But users have ignored a very important question. Theoretically speaking, the power amplifier bridge refers to the situation where the technical parameters of the two channels are completely equal, but in fact it is impossible, even the top foreign power amplifiers are very It's difficult to make the channels the same.

Improper power mismatch during bridging leads to burnout of the horn, first of all due to the crossover distortion caused by the bridging and the imbalance of the parameters of the two channels.

Bridging is like having your legs and hands tied together. When you use it, you have to maintain the common harmony of your movements, otherwise you will make mistakes.

3. Double "18" or double "15" or double "12" ultra low sound is usually 4 ohms, as long as the function can be bridged under 4 ohms, it has nothing to do with the working mode. The reason why some power amplifiers have high power is that the internal circuits are originally bridged. Ultra-low sound power Generally speaking, the power amplifier can be three times the extra power of the speaker. There are many factors to burn the speaker. In addition to the hardware itself, it is usually caused by improper personnel operation.

The LA + series inherits the excellent design of LA and has reliable performance. The optimized circuit design allows you to make full use of your potential. In addition, you can use it with full protection circuit. The overall cost-effectiveness is very high, and after the market launch, the response is good. This series is very suitable for on-site sound reinforcement system, fixed installation and other places.